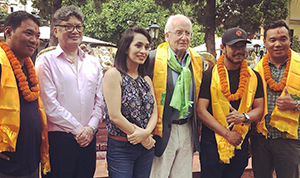 The legend of yesterday Doug Scott CBE, first to ascent the South West face of Everest honors the legends of today –  Nirmal Purja shattering world records of soon being the fastest climber of the 14 highest peaks. @14dawa Chang Dawa Sherpa youngest climber in the world of all 14 highest peaks and Mingma Sherpa, the first South Asian to climb all the 14 peaks. Honored to have their names in the #kghwalkoffame Nirmal Purja MBE: “Project Possible – 14/7”